As I mentioned in a previous post, when my husband and I stayed in Amalfi in 2015, we stayed in Praiano, which was quite a jog from Naples.

This time, I was smarter in my planning. Amalfi is one of the most beautiful places in the world (at least in my humble opinion), but (just a heads-up) it is a bit difficult to get anywhere along the coastline. For that reason, we briefly contemplated just staying in Naples, but Naples is shady and a little bit terrifying: some people say it’s completely safe and that it just gets a bad rap, but we drove through Naples from the ferry to the train station, and it looked a little bit like the south side of Chicago.

Instead, we stayed in Sorrento at the Hotel Britannia, with a view of the Mediterranean and Mt. Vesuvius.

TIP for you, though: If you plan on taking a taxi from Naples to the city you’re staying at along the Amalfi coast, make sure you get into a WHITE taxi, NOT a black taxi. Black taxis are not licensed to drive you anywhere. We learned this the hard way, 140 euros later.

Once we were finally at our hotel, we were starving. Our concierge recommended a place called Ristorante Verdemare, which wasn’t technically open but they served us anyway–and may I just say, the pesto ravioli was a little slice of pasta heaven.

Then we took the bus down to the Sorrento town square. The bus stop was right outside the hotel, by the way, which was super convenient, even if, on the way back, as the bus careened around the aforementioned insane curves, my friend Amanda looked and me and said, “Ashley, this is how we die.” 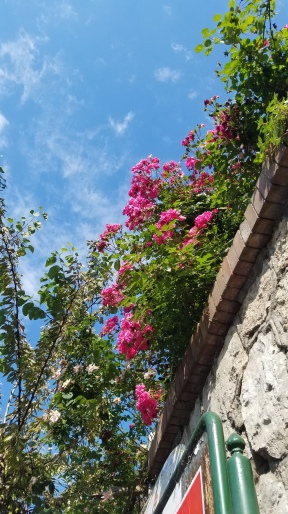 After wandering around the square for a while, sitting on a park bench in the shade with this amazing view, we wandered down this random alley that was full of little shops. Lots of lemony things (I was in heaven), including, but not limited to, ceramics (which Sorrento is known for) and really lewd bottles of limoncello (stay classy, Sorrento), right there on the street! 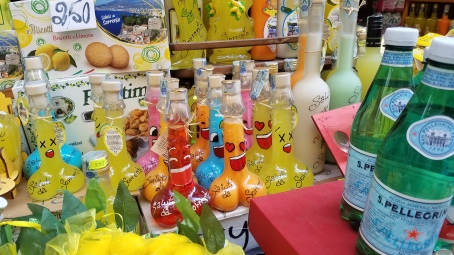 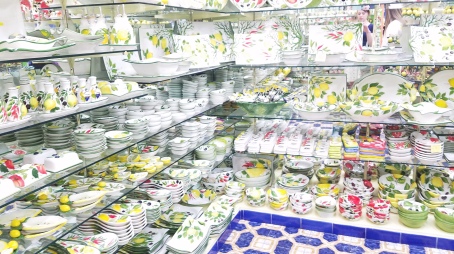 When I’m on vacation, I’m a big fan of planning out each day (as I’m sure you’ve noticed by now). But it was really lovely having nothing in particular on the docket that day. Sometimes just wandering around a new city in a foreign country and exploring all the nooks and crannies absolutely lovely. Granted, after a while everything starts to look the same, you notice the shops all carry the same products, but there was such a great energy in Sorrento.

If you’re going to stay just a day or two in Amalfi, as we did, I would highly recommend staying in Sorrento and giving yourselves at least half a day just to wander around. It’s the closest city along the Amalfi coast to Naples, the hub of all transportation, so it won’t take you a half a year to get there.

But if you’re planning on staying longer than a couple of days, I would recommend staying in Positano. Personally, it’s my favorite of all the towns I’ve visited along the Amalfi Coast, but more on that later!