So apparently Las Palmas is one of the most popular places in Gran Canaria. Blog posts told me so, Lonely Planet told me so, and so I assumed it must be true! They all made it seem like Las Palmas was kind of a big deal. I gotta be honest, though—I don’t really get the appeal. It was probably my least favorite area of the island. It was sort of like LA—kind of dingy, lined with expensive restaurants that seemed to offer subpar food, drunks sleeping it off on the beach behind the bathrooms—you get the picture.

The hubs and I spent the latter half of our first full day in Gran Canaria wandering aimlessly in Las Palmas. The Mercado del Puerto is supposed to be kind of a big deal, so we were interested in checking that out. We walked past it twice before realizing it was literally a courtyard with a few restaurants and a small market, which, unfortunately for us, was closed for the afternoon (“What are we supposed to do for hours each afternoon when all of the establishments are closed for lunch?” we Spoiled Americans exclaim in exasperation!).

Anyway, I don’t know why, but I expected something on a slightly…grander scale, I guess, for a farmer’s market that was labeled a “must-visit.” I guess the thing to do there is tapas-crawling, which probably would have been cool…except, you know, it was closed when we were there (go on, Ashley, keep on beating that dead horse!).

I’d also come across several different people who said La Casa de los Quesos was a MUST. Guys, they have 150 varieties of cheese from mainland Spain and elsewhere! I told my husband, WE NEED TO GO TO THE HOUSE OF CHEESE. The only problem? Again, they didn’t open till 5:30, we were there at 2ish, and so we had several hours to kill. When we finally made it at promptly 5:30, I was more than ready to stuff my face with cheese. Guys, it’s a great place to pick up things for a picnic! That’s what the blogs told me, guys! I was led astray!

The reality was much more disappointing…if they had 150 varieties of cheese, then I’m the Queen of England. The didn’t even have 100 blocks of cheese there. Forreal. They did have an extensive offering of wine, but, sorry, I didn’t go to the House of Cheese for wine. We spent like 5 minutes in there, and that was pushing it. I was so reluctant to believe the House of Cheese was a letdown…but that’s exactly what it was. And we essentially wasted like 2 hours in Las Palmas waiting for it to open. (I know, I know, I hear you playing your tiny violin.)

Okay, so I shouldn’t say we wasted 2 hours. That’s not exactly true. We got some gelato and casually strolled along the Playa de las Canteras boardwalk for a while. I will say there are some very interesting buildings peppered along that stretch of shorefront. The sound of the waves accompanied us as we snapped photos of interesting things we came across—kind of an extension of our morning in Aguimes, except the polar opposite; where Aguimes was nearly silent, Las Palmas was bustling. (Supposedly, this stretch of beach is supposed to be one of the safest for swimming and snorkeling, if you’re into that sort of thing.) The sky turned indigo as we rested on one of the ocean-facing benches that line the boardwalk, and then we headed to the heretofore-named “Epic Fail” that is the House of Cheese.

As part of my research about Gran Canaria, I also compiled a list of must-visit restaurants (I know—shocking!). While we were chilling at Mercado del Puerto with refreshing beverages, I’d set my sights on where we would be going for dinner. I may or may not have mentioned this before, but one of the things I do when I’m planning a trip is to plot all of the points on a Google map; I’ve found that it helps us make decisions on what we should do on a given day, or, as on this day, it helped us determine where we were going to eat dinner: Restaurante El Herreño. Lonely Planet said, “Don’t miss a visit to this atmospheric place with its cavernous dining rooms and well-prepared Canarian dishes at excellent prices. Kick-start your menu with a ración of mojo potatoes and then choose from a menu that reads like a book. The service is zippy and everything is freshly made – and fresh: the market is right across the street.” It sounds fantastic, no?

Well, let me paint you a word-picture of our journey from Playa de las Canteras to Restaurante El Herreño: Our Tep wireless hotspot decided it didn’t want to work anymore, so getting directions to this place was like pulling teeth; I finally latched on to someone random person’s network in order to put the address into the GPS. We made it to the area with little problem, but once we got there, it was a confusing network of one-way streets with hardly anywhere to park. I think we circled around that joint like 5 times before we finally were able to find a place to park. We follow the blue dot on Google maps to our destination, only to discover that the restaurant was closed. And not just closed for the night—we came to discover it was permanently closed. But, you know, when I looked up this place at 2 o’clock that afternoon, did it say anything about the place being closed? Nope. It told me what time they opened and closed. That’s it.

So by this point, I won’t sugarcoat it, we were both cranky over driving around in circles and well on our way to Hangry-town. (We kept joking, “This is all part of the experience,” but in the moment…we weren’t that amused. Hangry Ashley and Jeremy are not a good time, let me tell you.) I stood there staring at the “CLOSED” sign for a few minutes with my eyebrows forming question marks before turning my attention to the next restaurant, which is where we ended up eating. Who knows what we would have been willing to eat at that point—we were that hungry.

BUT, the good news was, the restaurant we unwillingly stumbled upon was actually SUPER TASTY: Restaurante Marsala. Fresh bread with some kind of herb-y butter spread and water to start, and suddenly we felt like humans again, hooray! I had the pork tenderloin with fig jam and damn was it yummy! (I would share a picture of it, but I think I devoured it within 5 minutes of the waiter setting it down in front me…)

The restaurant’s location reminded me a little bit of Florence, just in that the wide cobblestoned street wasn’t navigable by car; it was sort of tucked away. We wandered a little farther into the darkness, away from the main road after we ate, curious as to what else was around there. For the most part, it was quiet and still. There was a church there, and I think perhaps a university? It was hard to tell. By then, we were just ready to go back to the hotel. 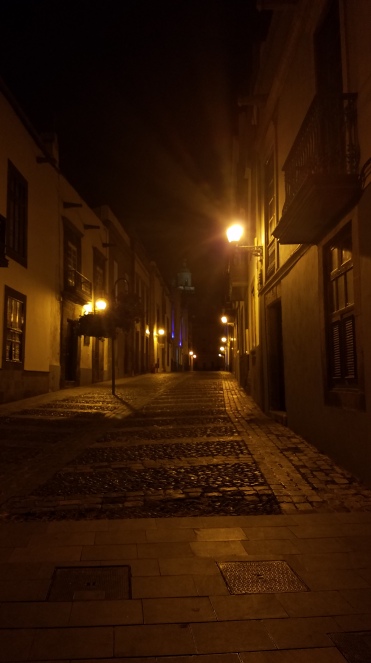 So I realize I’ve not painted the best picture of Gran Canaria in this post. Let me be clear: We had a perfectly lovely day. Aside from the stress of having unreliable internet and getting lost trying to find food we were desperate for, it was a lovely, aimless day spent in the company of my favorite person in the world. There are absolutely worse things.

But what I wanted to impress upon you with this post is that, in the grand scheme of things, and with all of the different things you can see on Gran Canaria (and there’s a surprising amount of different things to see and do on that little island), Las Palmas is very, very low on my list of must-dos and must-sees in Gran Canaria. If you find yourself with a day and you’ve got nothing to do, sure, check it out, but as you’ll find out in upcoming posts, there are some really cool things to see and do there that are much more worthy of your precious time.